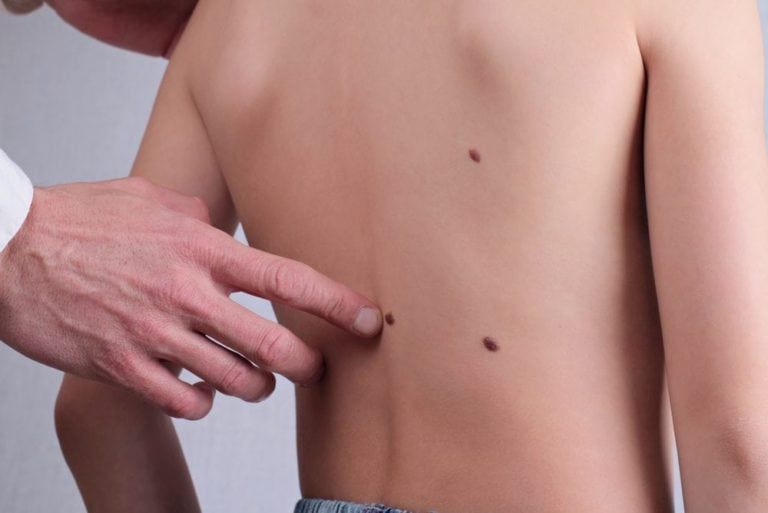 A mole is a pigmented spot on the outer layer of the skin. Moles are produced when cells called melanocytes cluster with tissue. Melanocytes are spread evenly all over your skin and when your skin is exposed to sun, they cause the area to tan.

Almost everyone has at least one mole. Whether hated for aesthetic reasons or worn proudly like  Cindy Crawford’s famous beauty mark, moles are more common than you may realize.

The average person has anywhere from 10 to 40 moles. Moles are not only brown. They can be the color of your skin, or different shades of pink, tan, or even dark blue. Hormonal change in puberty or during pregnancy can make moles darker or larger. Only about 2% of babies are born with moles. Moles can appear early in childhood. Some will appear later, usually until around age 20. The cause of moles is unknown, but atypical moles can be genetic and also be caused by sunlight.

To stay safe and catch skin cancer early should it develop, a skin examination of moles is recommended. Sometimes abnormal moles are a sign of melanoma. Melanoma is a cancer of the skin that is often caused by too much sun exposure or harmful UV rays in tanning beds. The incidence of melanoma is rising and is now the most common cause of cancer in young women. The American Cancer Society estimates that there will be about 90,000 people diagnosed with melanoma in the united states in 2018. About 9,000 people are expected to die of melanoma in 2018. These statistics are very concerning. However, Melanoma is highly curable if it is caught at an early stage, so do not delay having your moles examined.

The ABCDE’s of Checking Your Mole(s)

If you have a family history of melanoma or have a large number of moles, you have an increased risk of developing melanoma and it is especially important to do annual checks.

When you are checking yourself for moles, make sure to use a mirror in a well-lit room and look at all areas of your skin. Get someone else to check places that are harder to see, like your back.

If a mole appears, the most important thing to do is keep a close eye on it and make sure it doesn’t change in appearance. Use the alphabet to remember what an abnormal mole looks like.

Any other abnormalities on the surface of a mole such as swelling, oozing, or bleeding should also be reported to your doctor. Watch for any itchiness, tenderness, or pain as well.

Even if there are no health reasons to remove a benign mole, there may be a  few  reasons that you still want it removed. Some common reasons are that your moles are making you uncomfortable by rubbing against clothes or jewelry; you feel that the mole is unattractive; or you would like peace of mind by having it removed and making sure it is okay.

Benign moles can be removed with a simple, in-office procedure. There are currently many “home remedies” and devices that claim to easily take care of your mole, but many of these will cause infection, scarring, or worse. It is important to have a mole evaluated by a doctor before it is removed so that it can be tested at a lab.